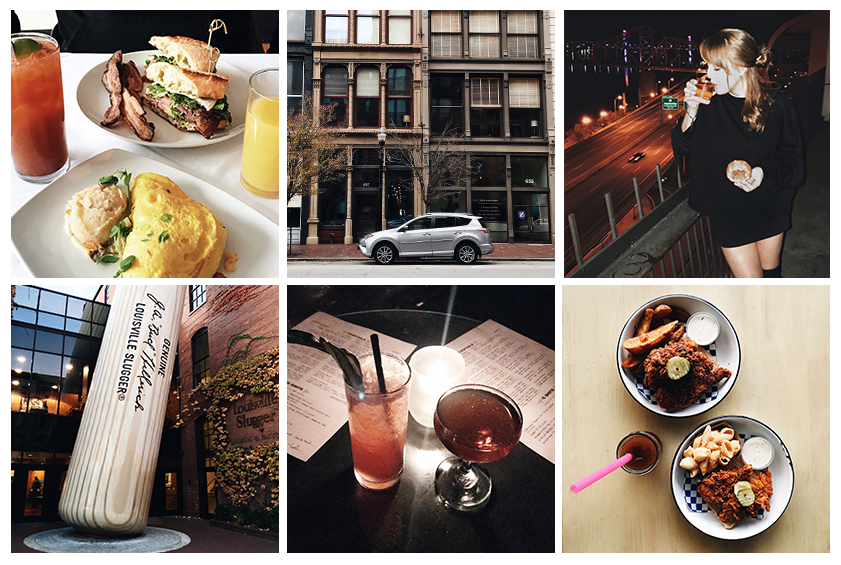 Can you believe this is my first post of the year? The last couple of months have absolutely FLOWN BY. After quite a bit of traveling towards the end of 2017, I have so many great trips and photos I want to share – but I wanted to start with a fun and unexpected trip to a place that hadn’t been on my radar. I guess sometimes you get so caught up on visiting the big cities like Los Angeles or New York, that you forget there is so much to see in between! However, when my boyfriend told me he was doing a show in Kentucky, it seemed like the perfect opportunity to go. I decided to do a fun Instagram recap to highlight some of my favorite spots 🙂 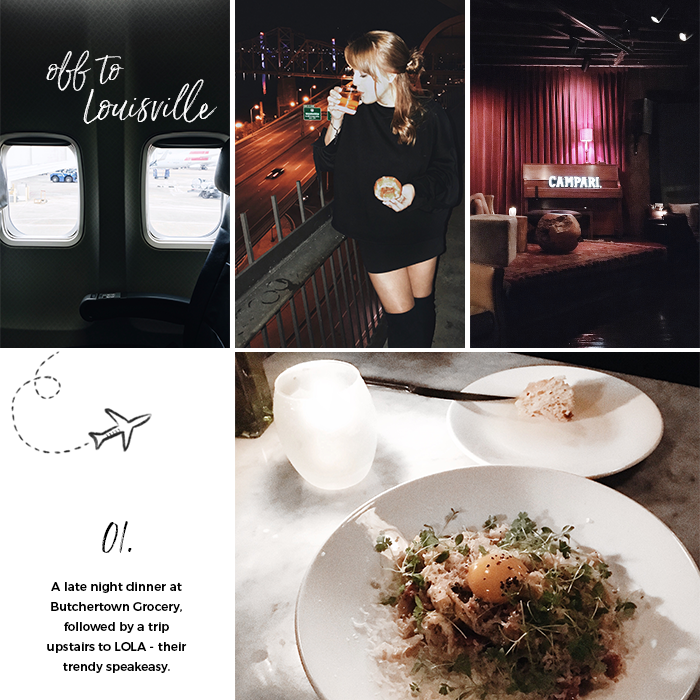 I made it into Louisville just in time for a late dinner at Butchertown Grocery – a new and trendy restaurant with a play on affordable fine dining. The entire interior is dark, candlelit and romantic. A retro black and white tiled floor, chic marble tables and exposed brick walls make for great interior accents. Perfect for a date night! We ordered the Fettucini pasta after our server informed us they handmade their pastas. It was so, so incredible. We also ordered the steak frites and truffle fries (which we basically order everywhere we go, because TRUFFLE FRIES.)

Afterwards we headed upstairs to LOLA, a sort of speakeasy connected to the restaurant. It’s loungy, it’s dimly lit, and it’s cool, but very welcoming and never stuffy. I had a fantastic sage and absinthe cocktail there, which was totally unexpected! They describe themselves as “a little bit raw, a little refined.” 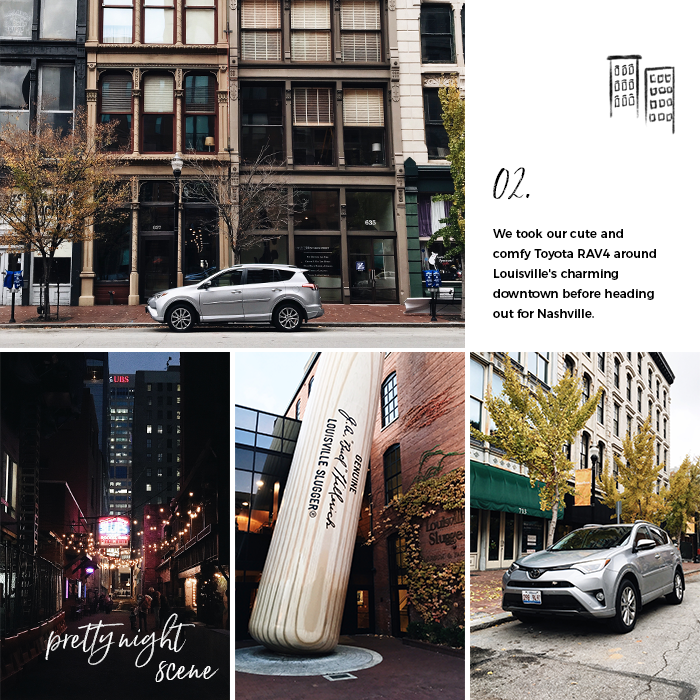 We decided to head out of town for a bit and take advantage of the fact that we were so close to Nashville. It was just under a three-hour drive and we were lucky enough to get this really cute Toyota RAV4 to drive in! It was extremely comfortable to ride in and perfect for a road trip.

We made it into town a little later than expected because we kept stopping to take photos, but luckily Nashville is really charming at night! 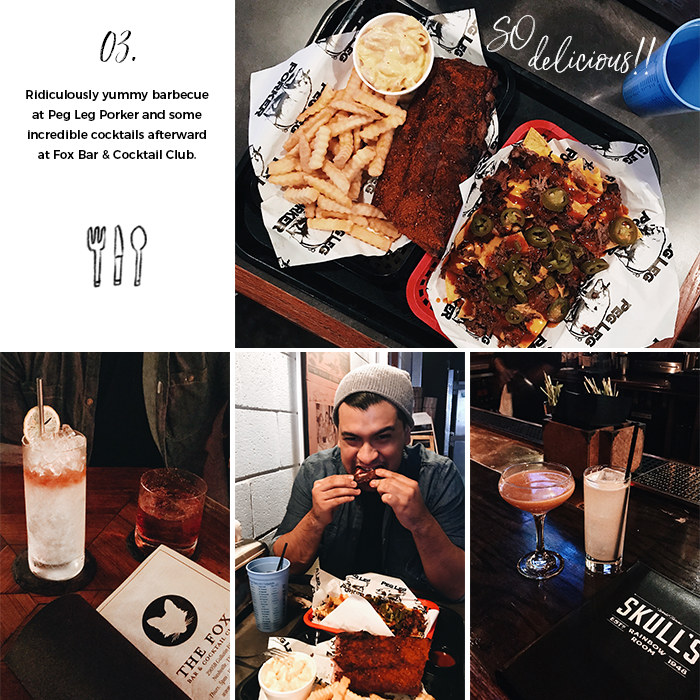 Because you can’t go to Nashville and not have barbecue – ordered brisket nachos, dry-rub ribs, and mac and cheese at Peg Leg Porker. They did NOT disappoint. Afterwards we grabbed a quick drink at Skull’s Rainbow Room in Nashville’s downtown area, before heading over to The Fox Bar and Cocktail Club in the East Nashville area. We came here on a friend’s recommendation and ended up having some mind-blowing drinks. Craft cocktails, exquisite appetizers, and fantastic service with attention to detail. Note: they’re tucked away in an alley behind Nicoletto’s Pasta. 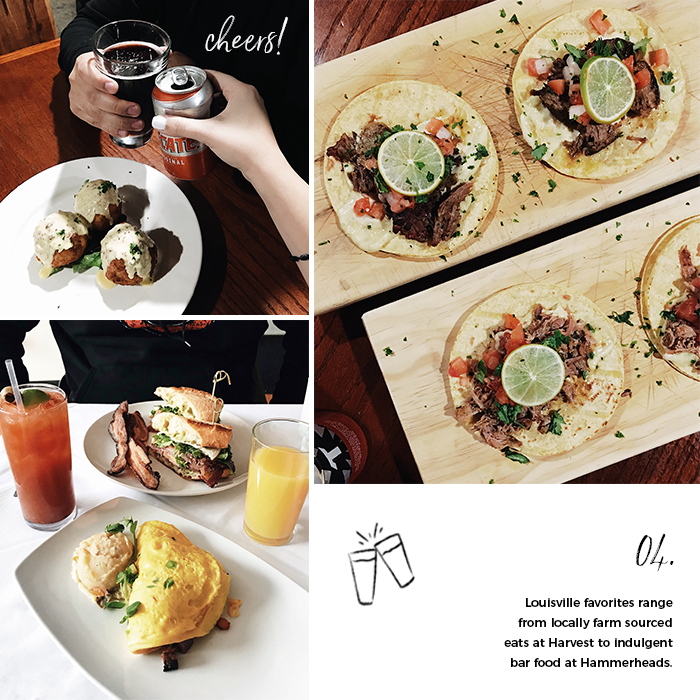 Back in Louisville so what do we do? Eat more, of course! We got a very warm welcome at Harvest for brunch, where they source 80% of their ingredients from the local area. I ordered the Farmer’s omelette, but the house smoked bacon and mashed potatoes were the stars of the show. Dinner was in the Germantown area at Hammerheads; a small restaurant occupying the basement of a house. They’re famous for their indulgent and delicious bar food. We ordered the mac and cheese balls, brisket and duck tacos, chorizo burger, and truffle fries. We REALLY love truffle fries.

I told my boyfriend while we were eating at Royal’s Hot Chicken that I would come back to Louisville for this fried chicken alone. It’s that good. You can choose your spice level and side – we went with fries and mac and cheese. Also, bourbon slushies FTW.

Feast Barbecue ended up being another Louisville favorite. I’m still dreaming about those covered tater tots! We tried the brisket and pulled pork, but didn’t order the ribs because they were nice enough to advise us that the ribs weren’t great that day. PS I think I ate more mac and cheese on this trip than I have in Dallas in the last 6 months combined.

We headed to Garage Bar after that for a quick drink, before heading back to the hotel to finish out my time there with some bourbon and donuts. The hotel room had a balcony and river view, so we took advantage of that as much as we could! See: first night photo.

And that’s all! Hopefully you enjoyed this little recap! Louisville ended up stealing my heart and I would be happy to go back anytime. They have a crazy amount of good food and good bourbon, and that’s saying a lot, because I don’t usually like bourbon 🙂

// A big thanks to Laurel Cabrera who made all the wonderful designs on this page. See more of her work here: LAUREL AUTUMN

// Also a big thanks to Toyota for providing their RAV4.